Meet our team and find out more about what brought them together and the things they treasure most. 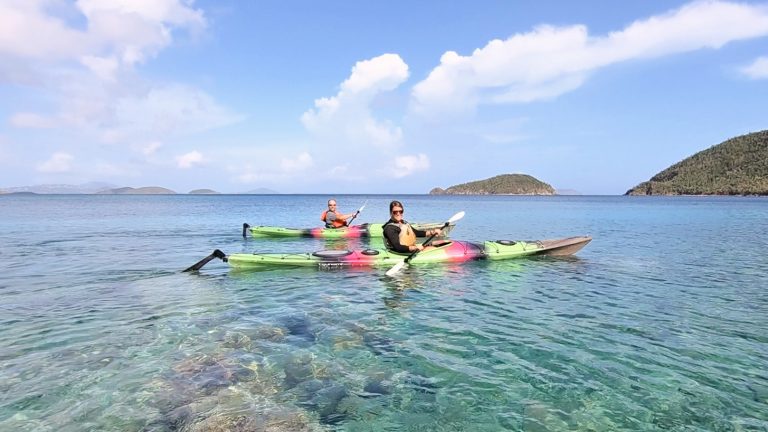 Liz was born and raised in the small town of Sanford, North Carolina.  After graduating college and exploring a few career options, she took a chance and moved to St. John in 2010 with nothing but a book bag.  She has proudly called St. John home ever since.

Liz is fortunate to have been given a healthy opportunity to cultivate her love and respect for the ocean.  Over the last 8 years she has worked on charter sailboats, dive excursions and as a guide for kayak and paddleboard tours and trips.  She loves to race her competition paddleboard and was the Top Female finisher in the PainKiller Cup in 2016 and twice has been a Top Three finisher in her category in the St. John Beach to Beach Power swim.

As a tenured guide, Liz prides herself on offering meaningful and well planned adventures that take her guests off the beaten path to ensure they have an experience that will be the best day of their vacation.  Her passion for St. John is contagious and she looks forward to sharing it with you.

Mike has had a love of the Virgin Islands since his father was living and working here 25 years ago.  During his summers away from college, he would spend his time down in the islands surfing, hiking and exploring.

Mike joined the Army in 1995 and spent most of his distinguished 23 year career deployed overseas with the Airborne and Special Operations community, before retiring as a Helicopter Flight Instructor in 2018.  However, his love for St. John was a magnet that kept drawing him back.  During his leave and breaks from deployments he would return to the islands year after year.

As an owner and guide Mike brings his sense of excitement, adventure and passion for the outdoors to the company.  He is a Combat Wounded Veteran who enjoys working with fellow wounded athletes and he loves the look on the faces of all of his clients as they experience the wonder and beauty of the islands.